Window convection is a process often misunderstood by homeowners. Many people simply think it is the same thing as drafty windows. But window drafts and window convection are two different things. 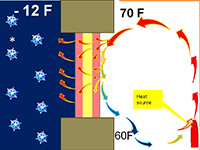 Window drafts are basically air flow in and out of the home through closed window spaces. Drafty windows are caused by many different things. Poor or cracked caulk jobs can create a draft, as can faulty or missing weather stripping. Even simply hung and slider windows, which already do not tend to seal as well as hinged windows with compression seals. failing to lock a window when it is shut can prevent it from sealing properly and cause a leak. This is especially true in double hung window. 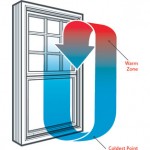 Some homeowners get new windows precisely for that reason, only to find that their new energy efficient windows feel drafty to them. Though it can be difficult to tell if it is

caused by convection or drafts, it is usually the former. Convection happens when air gives up its heat to the cooler surface of the glass and then sinks toward the floor upon being cooled. This movement in turn brings more warm air in toward the glass, which creates what appears to be a draft. What is occurring is the process of warm air forcing cold air to move owing to the density differences in the air at different temperatures. Heated air from your ductwork flows through the home and when it reach the window, it pushes cold air off the surface of that window and down toward the floor. Convection is proof that windows are working properly.

How to Combat Window Convection

To reduce the presence or frequency of window convection in your home, there are some things you can do. Leave your blinds or curtain slightly open to encourage warm air reach the glass. Remove all register air deflectors if its installed in your house.  Promote a warmer glass surface and that cycle will not be as pronounced. Make sure heat registers are not blocked by tables, couches, or other furniture. Get good air flow and equalize air temperatures throughout the room. Of course, window replacement also helps, as reduced heat loss makes that inside pane temperature closer to the air temperature. 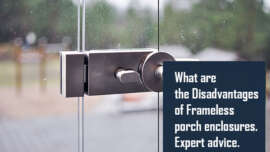 What are the Disadvantages of Frameless porch enclosures. 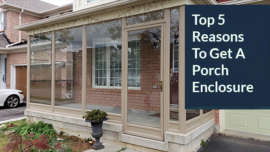 5 Reasons To Install A Porch Enclosure